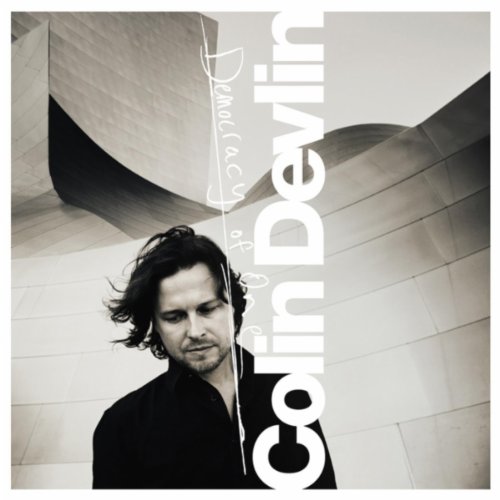 Democracy of One is not a debut it is our reintroduction to the unforgettable soundscapes crafted by this seasoned songwriter for more than a decade.

I came to creating music quite late, maybe sixteen, when I started to learn to play the guitar and sing, I still consider myself a beginner.

With encouragement from his brother Peter, Colin started to write some songs and they soon began playing small gigs in Dublin. He attended Trinity College for an amazing academic year before he had the pleasure of informing the Dean of Students that he'd been offered a recording deal by Capitol Records in Los Angeles and he wouldn't be back any time soon. Since then they have recorded four albums as The Devlins along with some amazing musicians, producers and friends. They've toured all over the world and music has afforded Colin the opportunity to meet a huge amount of wonderful, varied and interesting people from many walks of life.

He's taken these experiences and drawn upon them to help him make his first solo record - Democracy Of One.

Montreal has always been a very inspiring place for me, it is full of life and art and drama, a perfect place to write and record music. It seemed the obvious choice for me to record Democracy Of One there with my long time friend, producer and collaborator Pierre Marchand.

Pierre also produced the second Devlin's album Waiting, all of the Sarah McLachlan records along with several for Rufus Wainwright.

We had the luxury of time on this one, which can go both ways but Pierre had just built a great new studio and I willingly became the initial test case. We did it in a couple of recording stints which really helped, as they gave us time to think about what we had recorded and revisit it with fresh ears.

For the most part the band was a three piece on the album consisting of Colin on guitars and vocals, Pierre on bass and piano and their friend Matt Chamberlain (Tori Amos,Fiona Apple) on drums.

I wanted to keep it as sparse and as direct as possible and I think we succeeded in that. We put everything we had into it at the time and I'm very proud of the recording and hope many people get to hear it.

Democracy of One takes Colin s reputation for erudite simplicity to a whole new level. With this intimate solo album Devlin explores matters of the heart in a lush acoustic setting that puts his voice front and center, adding emotional nuance to songs such as The Heart Won t Be Denied, Refuge, and Raise The Dead.

In 2010 Colin was nominated for Best Irish Male at the Meteor Music Awards and Best Music Video for The Heart Won t Be Denied at the IMTV Awards. Another highlight was his standout concert performance at The Sundance Film Festival.

He has seen songs from Democracy Of One placed in several hit US television shows including One Tree Hill, Grey s Anatomy, Private Practice and The Cleaner.

We’ve got what you need to have a smooth move. Get started with FREE moving estimates from trusted companies.

Make your move with these free tools

Breathe a sigh of relief every time you tackle a moving to-do. From researching your new city with our guides to budgeting with free moving quotes, our resources help you every step of the way.

Let’s be real — you probably don’t love moving. Planning, packing, and heavy-lifting might not make your list of favorite things.

But you know what you can love? New life chapters and new places to call home. Let’s get you to the fun part, faster.

Before you make your next big move, crunch the numbers. See how much daily expenses cost in your new area and compare two cities by filling out the form below.

Want to know a city like a local before you move? We’ve got you. Check out our city pages for the inside scoop on average commute times, local attractions, and more.

Bring on the savings

We can't sugarcoat it — moving can be expensive. That's why we team up with your favorite brands to help you save on everything you need (and want!) for your new home. The best part? You won't find these deals anywhere else.

Save yourself time, stress, and back pain by calling in the pros. Whether you're planning to DIY or just need help with the heavy lifting, we can help you find a solution that fits your move and your budget.

Colorful Mountain Peak Shower Curtain Set Waterproof Bath Curtai
Should I Hire Professional Movers or Do it Myself?

MYMOVE is your one-stop-shop for all things moving. We know that moving can be stressful, and we’re here to help lighten the load. As an authorized affiliate of the USPS®, we connect more than 5 million people each year to name-brand deals and expert resources that make moving easier. We bring everything you need for your move together, so you don’t have to manage it on your own. With MYMOVE, you can say goodbye to moving stress and hello to tools that help you tackle your move.

How can I use MYMOVE’s resources to check off my moving to-dos?

We’re here to help you take control of your move. Learn everything you need to know about your new area with our city guides and Terminals RING PERMA-SEAL TAPE L TAPED (SC-230-56T), (19164-0318. Organize all of your to-dos with our customizable moving checklist. Compare moving companies on our site to find the best moving services. Declutter before you pack, and we’ll help you find charities in your area that do free donation pickup. File an online change-of-address with USPS®, and we’ll make sure your mail moves with you. No matter the moving task, we help you tackle it.

Are you planning a move during COVID-19? You’re not the only one. 15.9 million people moved during the first six months of the coronavirus pandemic, according to a recent MYMOVE study. The study, which looked at USPS® mail forwarding requests from February to July, found that the total number of moves during coronavirus increased compared to the same period last year.

If you have plans to move during the pandemic, take precautions to keep you and your family healthy. Follow our Men's Casual Tracksuit Full Zip Sweatsuit Track Suits 2 Piece Se to prevent the spread of the virus on Moving Day. If you’re a college student moving out of the dorms for winter break, here are some tips and resources to help lighten the load and keep you safe.

Winter months and the pandemic can add stress and anxiety if you’re experiencing housing instability. If you’re facing possible homelessness or are at risk of a lease ending during coronavirus, our guides connect you to resources and expert advice.