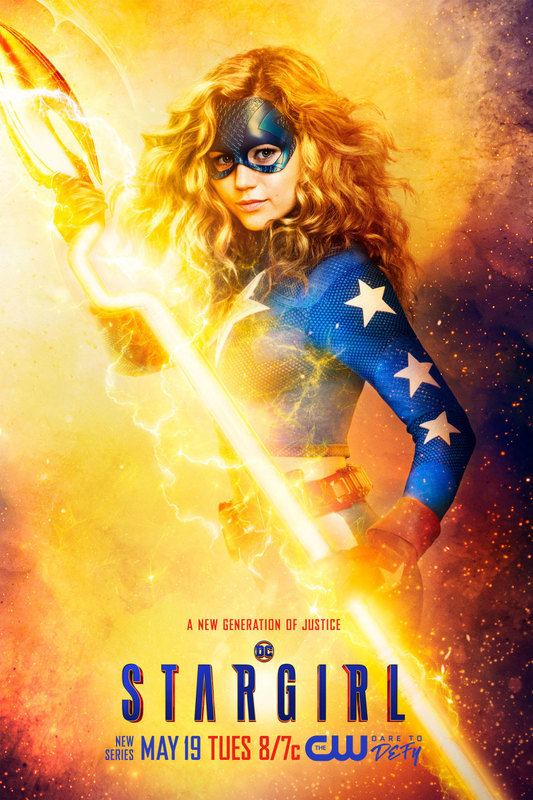 Some of that comes down to the show’s choice of protagonist. Courtney Whittmore (Brec Bassinger) has kind of a lot on her plate right now. The high school sophomore is dealing with the stress of making new friends in a new school after her mother (Amy Smart) moves them from California to Blue Valley, Nebraska with new husband/stepfather Pat Dugan (Luke Wilson), a charming goober, and his son Mike (Trae Romano). Mike loves Pop Tarts. Courtney, on the other hand, loves reminding Pat that he’s not her real dad, though her “real dad” hasn’t been seen since bailing on her one Christmas Eve, a decade in the past. By complete coincidence, Pat also lost someone that same night: Sylvester Pemberton (Joel McHale), better known as Starman, who died fighting various and sundry members of the Injustice Society of America that night and who knew Pat best as his sidekick, Stripesy. When Courtney, sulking in very teenage way in her new basement, stumbles on photos of Pat, Starman, and the long-since dismantled Justice Society of America, she realizes her stepdad might be more than he seems—and when a mysterious, glowing, gravity-defying staff seems to call to her from a heavy crate, she senses that she herself might be different, too.

Like many superhero stories, “Stargirl” divides itself between the two halves of Courtney’s life: the half where she smiles at cute boys, butts heads with teachers, and overhears all manner of things while standing at her locker, and the half where she hangs out with a glowing, sentient staff that flies her through the air and serves as gymnastics equipment and explosive device in one. This series is far, far more interested in the latter; school seems mostly to be an excuse to put Courtney in the orbit of, among others, fellow frustrated teens Yolanda Montez (Yvette Monreal), Beth Chapel (Anjelika Washington), and Rick Tyler (Cameron Gellman), each of whom has their own cross to bear. And that’s perfectly okay. The scenes in which Courtney gets to know her new weapon/flying machine/buddy are among the most engaging in the five episodes provided to critics.

That’s not a complaint, and it’s easy to see why the balance might have shifted this way. There’s an energy about “Stargirl” that practically demands to be described as “Amblin-esque.” Frequent DCTV director Glen Winter, who helms the pilot, captures the action sequences with his usual easy grace, but also makes time to evoke films like “E.T.,” “The Neverending Story,” and “The Iron Giant.” There’s a balance struck between playful adventure and lingering, haunting loss, but as Courtney tests her new boundaries, it’s the playful stuff that wins out. The obvious increased budget and technical wizardry of those involved is immediately apparent—the effects are much more in line with a comic book film than many of its TV-network brethren. More importantly, no less apparent is the jubilant energy of Bassinger, who plays Courtney with the undeniable sense of invincibility and naivete so often glimpsed in the young and relatively privileged.