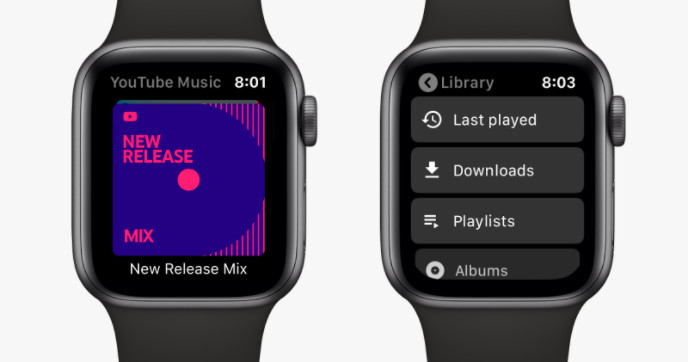 YouTube Music launched yesterday on the Apple Watch, arriving before an official Wear OS version and only further illustrating Google’s ongoing issues with its competing wearable platform. The app — available to YouTube Music Premium and YouTube Premium subscribers — mirrors all the same features it launched with on iOS, but now in compact watchOS form. Users can stream, control playback, and even cast music from their wrist, complete with a nice complication for Apple Watch watchfaces.

Landing on the Apple Watch first shows Google’s commitment to growing YouTube Music’s audience. Apple still controls half the smartwatch market, so showing up is ultimately in Google’s favor. But skipping Wear OS at launch underlines how hobbled Google’s platform has been from the start. A small install base and slow development of processors from partner Qualcomm has led to Wear OS lagging behind competitors Apple and Samsung for years.

The release of Qualcomm’s newer chips, the Snapdragon Wear 4100 and 4100 Plus, aims to solve the speed issues that hurt past Wear OS devices. Paired with a Wear OS update this fall that focuses on streamlined interface elements, there’s hope Google’s partners can develop devices better suited to compete with Apple’s market dominance. Google has also reportedly been trying for quite some time to get its own internal smartwatch hardware off the ground, after a failed attempt back in 2016.

That could be where Fitbit, which Google acquired last year, comes in. Fitbit’s team makes an excellent addition to Google’s own, but acquiring the former’s trove of health data is another thing. Obstacles in the way of closing the deal from the EU and the long-term prospect of integrating the two companies’ hardware teams means the release of a true “Pixel Smartwatch” will take more time. Google hasn’t given up on Wear OS, but the path ahead is unclear — and the platform isn’t growing fast enough to be of bigger use to YouTube Music than the Apple Watch.

Alex Essoe Talks Death of Me, Her Doctor Sleep Experience and More [Exclusive]